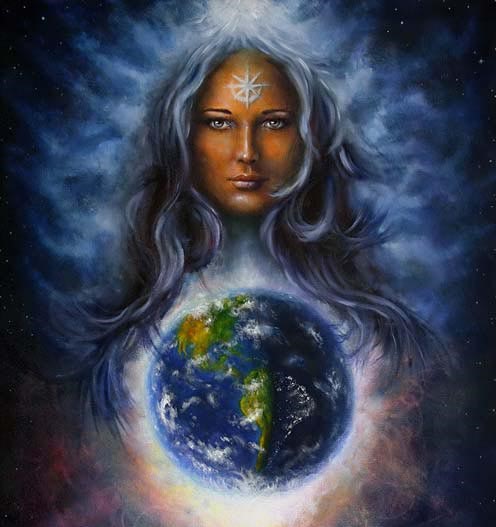 Surrender in stillness to Mother Gaia and hear the sacred conversations of the trees and the gentle whispers of the mountains. The Devi Yoga workshop invites you to unite with Mother Gaia: feel her skies as your vast soul; her rolling fields as your loving heart; her oceans as your sensual body; and her core as your deep roots, as you surrender to yoga poses and invoke the healing portals of Mother Earth.

I am the great drum of Earth. Lay yourself upon me, and you shall hear me for I beat through with the energy of love.

What is primordial joy and how can it become a path to our awakening? What are the divine feminine and the divine masculine aspects of our own self? How can humanity transition from the current patriarchal world to a matriarchal world in which joy becomes our natural state of beingness instead of suffering? Goddess Lakshmi promises nothing short of a grand transformation of humanity with the birthing of a new joy-centered consciousness on Earth at this time. She and other ascended Goddesses from different spiritual pantheons have joined together to create a global Devi Circle movement which together with other women circle movements in many countries are ushering in a once-in-a-millennia transformation of humanity. Goddess Lakshmi gives a new vision of a matriarchal world in which men, women, and humans of all genders are truly equal; a world run by a shared leadership model in which one queen or one king is not above the rest; a world in which sensuality is not separate from spirituality, and human body is not seen as something to be ashamed of but a temple to be honored for spiritual transformation. Based upon the teachings of Goddesses Lakshmi and Saraswati from the first book, "A Thousand Seeds of Joy: Teachings of Lakshmi and Saraswati" of the Ascended Goddesses Series by Ananda Karunesh, this process will cover various topics-including the archetypes of divine feminine and divine masculine, soul feelings, chakras, elements, karma, law of attraction, sensuality, spirituality, higher self-that are at the heart of both the individual and the global spiritual transformation. The participants will engage in guided meditations, experiential exercises, and group sharing facilitated by the instructor. Goddess Lakshmi takes us on a spiritual journey by weaving new insights into ancient teachings, correcting what has been altered in scriptures by their "male" authors, and revealing new secrets about Buddhas, and Gods and Goddesses who have walked on Earth. Whether it is Eve's original sin or the closing of magnificent Goddess Temples or Sita's Fire Test or Mary Magdalene's depiction as a prostitute, "enlightened women" have been portrayed as sinners by numerous kings, emperors, writers, popes, and other religious heads for millennia. The messages of Goddess Lakshmi correct many misconceptions and misrepresentations about the "patriarchal" stories from Christianity, Hinduism (i.e., Ramayana, Mahabharata, and Bhagavad Gita), and Buddhism. These profound messages by Goddess Lakshmi will delight you, surprise you, transform you, and even enlighten you.